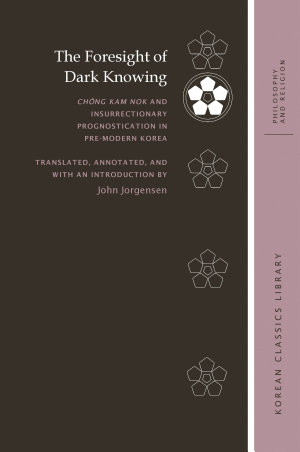 Korea has long had an underground insurrectionary literature. The best-known example of the genre is the Chŏng Kam nok, a collection of premodern texts predicting the overthrow of the Yi Dynasty (1392–1910) that in recent times has been invoked by a wide range of groups to support various causes and agendas: from leaders of Korea’s new religious movements formed during and after the Japanese occupation to spin doctors in the South Korean elections of the 1990s to proponents of an aborted attempt to move the capital from Seoul in the early 2000s. Written to inspire uprisings and foment dissatisfaction, the Chŏng Kam nok texts are anonymous and undated. (Most were probably written between the seventeenth and late nineteenth centuries.) In his expansive introduction to this first English translation, John Jorgensen notes that the work employs forms or codes of political prediction (Ch. tuch’en; Kor. toch’am) allied with Chinese geomancy (fengshui) but in a combination unique to Korea. The two types of codes appear to deal with different subjects—the potency of geographical locations and political predictions derived from numerological cycles, omens, and symbols—but both emerge from a similar intellectual sphere of prognostication arts that includes divination, the Yijing (Book of Changes), physiognomy, and astrology in early China, and both share theoretical components, such as the fluctuation of ki (Ch. qi). In addition to ambiguous and obscure passages, allusion and indirection abound; many predictions are attributed to famous people in the distant past or made after the fact to lend the final outcome an air of authority. Jorgensen’s invaluable introduction contains a wealth of background on the history and techniques of political prediction, augury, and geomancy from the first-century Han dynasty in China to the end of the nineteenth century in Korea, providing readers with a thorough account of East Asian geomancy based on original sources. This volume will be welcomed by students and scholars of premodern Korean history and beliefs and those with an interest in early, arcane sources of political disinformation that remain relevant in South Korea to this day. 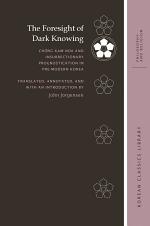 The Foresight of Dark Knowing

Authors: John Jorgensen
Categories: History
Korea has long had an underground insurrectionary literature. The best-known example of the genre is the Chŏng Kam nok, a collection of premodern texts predicting the overthrow of the Yi Dynasty (1392–1910) that in recent times has been invoked by a wide range of groups to support various causes and 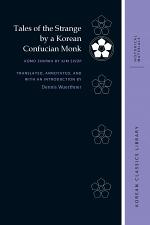 Tales of the Strange by a Korean Confucian Monk

Authors: Dennis Wuerthner
Categories: History
One of the most important and celebrated works of premodern Korean prose fiction, Kŭmo sinhwa (New Tales of the Golden Turtle) is a collection of five tales of the strange artfully written in literary Chinese by Kim Sisŭp (1435–1493). Kim was a major intellectual and poet of the early Chosŏn 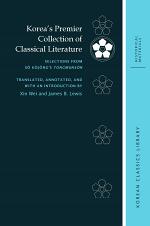 Authors: Dennis Wuerthner
Categories: Literary Collections
This is the first book in English to offer an extensive introduction to the Tongmunsŏn (Selections of Refined Literature of Korea)—the largest and most important Korean literary collection created prior to the twentieth century—as well as translations of essays from key chapters. The Tongmunsŏn was compiled in 1478 by Sŏ 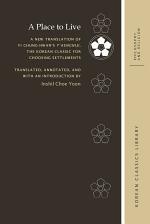 A Place to Live

Authors: Dennis Wuerthner
Categories: Religion
A Place to Live brings together in a single volume an introduction to Yi Chung-hwan’s (1690–1756) T’aengniji (Treatise on Choosing Settlement)—one of the most widely read and influential of the Korean classics—and an annotated translation of the text, including the author’s postscript. Yi composed the T’aengniji in the 1750s, a 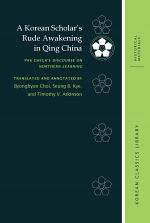 Authors: Pak Chega
Categories: History
Two years after Adam Smith’s Wealth of Nations was published in 1776, Pak Chega’s (1750–1805) Discourse on Northern Learning appeared on the opposite corner of the globe. Both books presented notions of wealth and the economy for critical review: the former caused a stir across Europe, the latter influenced only